Here, you can study and practice each requirement for your Scout rank.

Requirement 1:
A:
Scout Oath: On my honor I will do my best to do my duty to God and my country and to obey the Scout Law; to help other people at all times; to keep myself physically strong, mentally awake, and morally straight.
Scout Law: A Scout is trustworthy, loyal, helpful, friendly, courteous, kind, obedient, cheerful, thrifty, brave, clean, and reverent.
Scout Motto :Be Prepared.
Scout Slogan: Do a good turn daily.
B: Scout spirit is an ideal attitude that Scouts around the world are supposed to show, based on adherence to the Scout Oath and Law.(wikipedia Definition) (you must also describe how you demonstrate scout spirit in your everyday life.)
C: Scout Sign 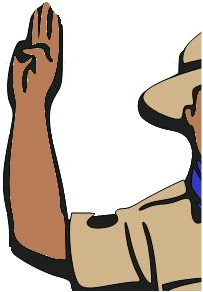 Hold your right arm straight out to the side, Elbow bent at a 90 degree angle, and hold three fingers up as shown.
Scout Handshake 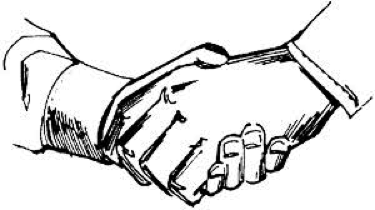 The scout handshake uses the left hand instead of the more commonly used right hand. Often, scouts will also hold out three fingers of their left hand during the shake, in similar fashion to the Scout sign.

Scout Salute
The Scout Salute Is simply a salute using the three fingers of the scout sign. 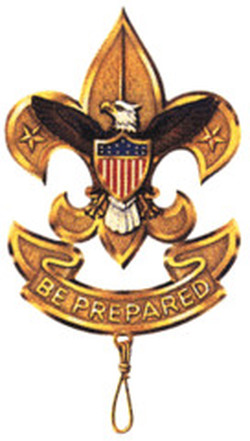 ﻿
The First Class Merit badge is full of symbolism. The tip is pointed to symbolize a compass because the scout is able to follow the right path in life. There are three points, the trefoil, like the scout sign. The points represent Duty to God and Country, Duty to Others, and Duty to Self. The Eagle and Shield represent America, they represent freedom and the scouts willingness to protect that freedom. The two stars represent Truth and Knowledge. The scroll with the Scout Motto is shaped like a smile to show a scouts cheerfulness when performing his duties. The Knot at the bottom represents the Scout Slogan.
The First class Badge shows that a scout has learned all of his basic skills and is now ready to progress towards eagle. It also means a scout is eligible for the Order of the Arrow.

E: Outdoor Code
As an American, I will do my best to -
Be clean in my outdoor manners.
Be careful with fire.
Be considerate in the outdoors.
Be conservation minded.
(You must explain what this means to you.
F: Pledge of Allegiance

I pledge allegiance to the Flag of the United States of America, and to the Republic for which it stands, one Nation under God, indivisible, with liberty and justice for all.
(you must explain what this means in your own words)


(Next Requirements will be added soon)
Return to Rank ADvancement page.